(a) The simple idea that by pumping up total spending, government can supplement depressed private spending and temporarily boost economic activity has appealed to economists and governments since the Great Depression of the 1930s.

(b) Separating out the automatic changes in the fiscal position from the discretionary ones is difficult, and it is impossible to assess the counterfactual of how the economy would have performed had there been no fiscal response.

During a recession, automatic changes take place in the fiscal position (budget deficit/surplus). Why? Also give some examples of discretionary changes in the face of a recession and their effect on the budget.

(c) What has been ignored in current debate is that fiscal contraction that targets wasteful government programs improves macroeconomic performance.

Explain by what process a fiscal contraction could possibly improve macroeconomic performance.

(d) The key question is whether Australia really needs fiscal ‘stimulus’ in the form of budgetary outlays when monetary policy is best placed to influence short-run macroeconomic activity.

In what way can monetary policy be used to create economic ‘stimulus’ and why, does Makin argue, is it more effective than fiscal policy?

The elasticity of different food category clearly reveals that people crave for unhealthy foods like sweets and sugar based snacks as they have lower elasticity reflecting inelastic demand. That is for one unit change in price the amount change in demand would be less than one unit. This kind of demand creates more burden on consumers when the goods are taxed (Stiglitz and Rosengard 2015). Hence imposition of tax can be good way to reduce consumption of this food category that contributes to diabetes, obesity and associated heart diseases and cancer. The subsidy on the other hand makes the per unit price of the product lesser as the consumers now pay lesser and government pays part of the price. The data reveals that high calorific fruits and vegetables are more elastic, which further means for one unit fall in price, demand for that would rise by more than one unit. This suggests that government should go for a policy mix that not only imposes tax on the unhealthy food categories but also provide subsidy on the healthy food category. This would discourage the consumers and make the consumers shift toward good habit of food dropping the junks. 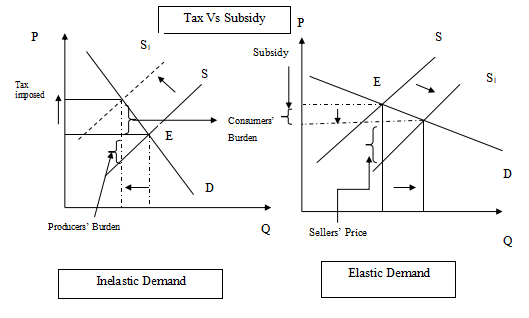 The simple idea here refers to the fact that when an economy fall sunder the trap of economic downturn, expanding the demand of the economy is best short run solution as suggested by J.M. Keynes. Demand side economy is under the focus compared to the supply side of it as explained by classical economists.  Expansion in demand can be brought through two channels. One is increase in the government expenditure and other is decrease in rate of interest operative through expansionary fiscal and monetary policy. Combination of both of these boosts the depressed spending level in economy while increasing demand made the economy come out of depression (Bibow 2013).
In times of recession, government loses it revenue due automatic changes in form of decreasing income tax, corporate profit tax that reduces government revenue. But it has to make more expenses even than before through enactment of countercyclical policy if it decides to take the economy out from the shackles of downturn caused by recession. This happens without any pre decided policymaking and under the effect of changing economic condition (Rios and Brue 2013). Thus its called automatic stabilization which often leads to budget deficit in the fiscal position. Discretionary changes in the fiscal policies take place when government wants to act stringently over the existing polices. It may adopt reducing tax rates and increase spending by making new rule backed by legislation. The expansionary fiscal policy taken in face of recession always worsens the budget leading it toward deficit. However, less tax on the other hand enhances disposable income and consumption further to boost the aggregate demand and consequently rising level of price and output.
Fiscal contraction takes place when government reduces its expenditure and increases tax rates. From the NI accounting equation one can say that T>G and that leads to surplus budget situation. Even though greater T reduces disposable income and hence consumption consequently, the less G leads to less debt burden of the government that leads to higher national savings in form of greater public savings (Hyman 2014). The more savings make the nation invest more on its growth and depend less on others in terms of loan. This also reduces the interest payments making the country gain self reliant and less debt burden allowing it to enhance macroeconomic performance.
In times of recession or economic downturn role of expansionary monetary policy is huge as it focuses on increased money supply in the money market. Through open market operation government buys out bond from people and allow them to hold more money in hand than on stocks or bonds. Greater money supply leads to fall in interest rate makes saving unattractive. Speculative demand for money falls. Borrowing, investment become cheaper that allow the business to expand and induces consumption to increase (Taylor 2012.) More consumption, investment leads to more aggregate demand boosting economic output. 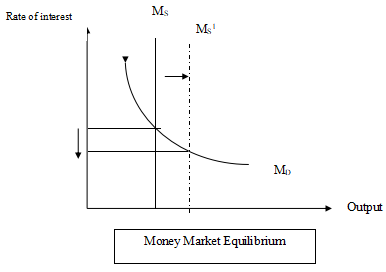 Monetary policy is always better than fiscal as the latter consumes mor etime to be operative and evident due to strong political influence and lagging procedures of implementations. Issue of budget deficit another negative side of it compared to which monetary policies initiate quick response in the market through signals sent in money market.