A.Assuming tomatoes are sold in a purely competitive market, use the supply and demand diagram to describe, ceteris paribus, a major factor contributing to the price of tomatoes to rise in Australia. In your discussion make sure to explain the process of moving to the new equilibrium output and price.

B.How would this impact other markets in the industry?

B.Based on your answer in part 2(a), explain and illustrate hypothetically, what should be the effect of the rising price of tomatoes on the total revenue of the tomatoes wholesale market.

A.Considering the fact that many tomato farmers could abandon the industry, explain graphically, the different strategies that government should adopt to sustain the long-term supply of tomatoes.

B.Make sure to discuss the advantages and disadvantages of the strategies you have mentioned.

A.Major factor contributing to the price of tomatoes to rise in Australia in a perfect competitive market.

In Bowen, after the Cyclone Debbie hits the area it affects the tomatoes production which is 95% of the Australian market. Since the damage in Bowen is expected to be significantly large it will create a shortage especially for the tomatoes (Basar and Pau, 2014). As expected in a perfect competitive market, shortage in tomatoes leads to a decrease in supply and a consequent increase in demand. An increase in demand in the market will subsequently lead to increase in prices of tomatoes from $9 to $ 10 for a kilo of good quality tomatoes.

It is expected that the damage will be done to more than 160 million crops of tomatoes sharply decreasing the supply of the commodity and increasing the demand and the resultant price. The major factor leading to the rise of tomatoes prices is decrease in supply. 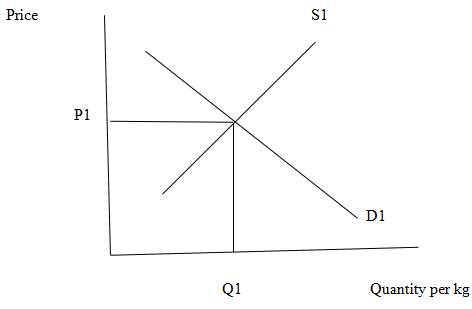 A decrease in supply changes the supply curve to the left. The equilibrium prices will also raise from $9 to $ 10 Australian dollars for a kilo of quality tomatoes. As the prices of tomatoes raise to the new equilibrium levels production or output will fall. In a competitive market, possible supply shifters will increase the prices of inputs that are subsequently used in tomato output p[production (Strauss and Woods, 2007). A decline in production or output is caused by the Cyclone Debbie leading to an increase in prices and therefore changes in change in equilibrium price and output. 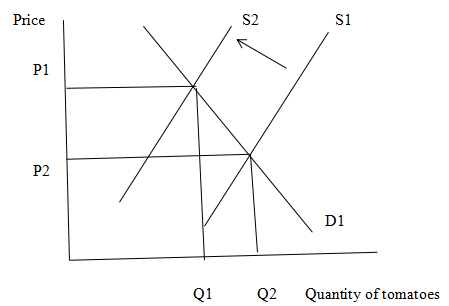 Diagram of shift of supply curve

B.How would this impact other markets in the industry?

When the supply of tomatoes decreases the demand increases it pushes the prices of commodities up. The result is that other industries will be affected either positively or negatively. First vegetables that act as substitutes for tomatoes will have a higher demand. Carrots and capsicum which can be perfect substitutes will see an increase in demand therefore also increase in price.

1.Determinants of price elasticity of demand

2.Proportion of the purchasers budget that the item consumes

A negligible portion of a consumers budget is spent in buying tomatoes, thus, demand tends to be inelastic (Young, 2009).  The products that consume a higher portion of the consumer’s budget tend to be elastic and the consumer will seek to seek substitutes.

Elasticity is lower for goods that are regarded  as very important. Tomatoes are on this category, consumers will still buy tomatoes regardless of the price. An increase in price of tomatoes will not hinder consumers from buying the products.

In a perfect competition market, where there are a big number of suppliers and consumers of a similar product, the consumers or buyers and sellers can find one another at no cost. There are little or no barriers that prevent other suppliers from entering the market. In this type of market, no one has the ability to affect the prices of tomatoes. The prices are dictated by market forces of demand and supply. As long as there is satisfaction derived from the tomatoes, consumers will continue buying. Conversely, suppliers will continue to sell as long as the price of the tomatoes exceeds the marginal cost of production( or the cost 0of making one more). The tomatoes will be sold at a higher price because of the low supplier. However, the revenues derived from the sale of tomatoes will be slightly lower that the initial revenues when the supply was high. It is because the is low supply of tomatoes.

the government boosts may apply the use of subsidies to boost demand of a product or encourage the farmers to produce the product(tomatoes). The government finances subsidies by borrowing or taxation. This causes the supply curve to shift to the right (Young, 2009). The government by reduce the cost of factors of production through the subsidies.  The total output multiplied by unit per subsidy equals to the amount spent on the subsidy. Demand can be boosted if the government gives direct subsidies to the consumers. 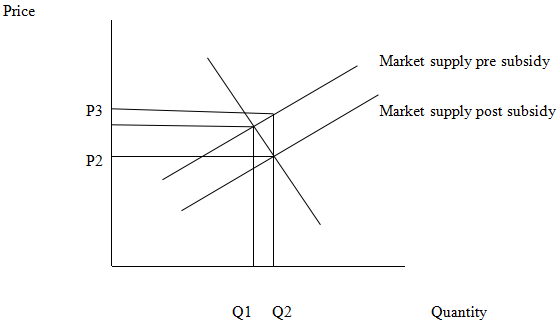 The area between p2 and p3 is total subsidy or what the government has spent to the subsidy. The farmer receives price P3 while the consumer pays price P2 for the tomatoes. This encourages demand and the high prices received by the farmers encourages production.

The second strategy that the government may use to sustain long term supply of tomatoes is by reducing taxes so that it can encourage the suppliers to continue supplying while creating demand because the prices will drop therefore boosting the demand (Kostigen, 2011).

The two strategies are subsidies and reduction of tax. The two have their advantages as well as disadvantages. Though almost similar, the two strategies have different approaches in which implementation by the government is essential.

In subsidy strategy the advantages include that in long term tomato farmers will have better leverage in inputs therefore the cost of production will reduce leading to increased production. Secondly, increased production means that the company will increase profits after bumper output. Increased subsidy also ensures that more farmers in Australia venture into the farming business (Singh, 2013).

The disadvantages include; loss of revenue by the government. Subsidies also increase the number of people willing to do tomato farming. More farmers in the country means increase in supply or oversupply in some cases which results to reduced demand and hence reduced prices per kilogram of tomato.

The other strategy is reduced taxes which mean that the government will reduce its revenue while increasing the ability of farmers to get into tomato farming (Strauss and Woods, 2007). It is a perfect strategy although may be short term rather than long term.