The following table shows the quantity of a product demanded at two different prices:

iv) A rise in tax on petrol and a reduction in tax on cars. 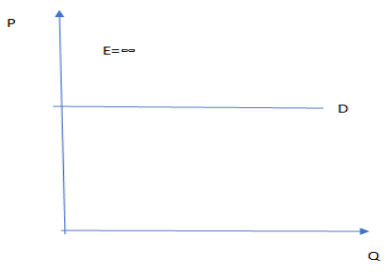 Australian farmers have to produce wheat at a fixed price. Therefore, whatever be the quantity of wheat supplied the farmers cannot alter the price of the wheat and they have sell the wheat at the same price. This is because other farmers are selling the wheat at a particular price, so the Australian farmers will also have to sell wheat at the same price. However, when the farmers will change alter the price of wheat it will lose all it buyers when the price of wheat will be increased. This is a situation of perfectly elastic demand curve where price will not alter along with the change in the quantity supplied (Nagle & Müller, 2017).  This states that a change in price will eliminate all the demand from the market. When there is a perfectly elastic demand consumers can switch to other alternatives.

In a market which is perfectly competitive there is a presence of lots of firms. Therefore, in order to succeed and in order to stay in competition firms will have to innovate and work hard to do something new so that customers are attracted to it. In the modern world developing and producing better services is very necessary. Therefore, a firm in a competitive market need to innovate to perform well in market (Azevedo & Gottlieb, 2017). Had the firm been in a monopolistic market, it could have skipped innovation as it would have been the sole seller of the products. Due to inefficiencies a firm may face huge losses, so firms must innovate new ideas so that it can increase their efficiencies and are not left behind. However, competitive markets can hinder innovation like when there is huge competition in the market and the firms may not earn high profits at that time it is not possible to spend enough money for innovation.

Total revenue is the product of price and quantity. When the firm increases its sale of a product there will be increase in revenue also. When there is double the amount of output sold by the firm the total revenue of the firm also tends to doubles provided the price does not changes (Kolmar, 2017). When a frim sells greater quantity the revenue earn will also increase simultaneously. Therefore, when a firm in the perfectly competitive market doubles the quantity of a product is sells, price remains the same and the total revenue earned also increases twice. Total   revenue consists of the product of the price and the quantity sold therefore, doubling total revenue will result from doubling of the quantity produced.

When price falls from $16 to $14 the change in price is $10. The proportionate change in the quantity demanded will be change in quantity divided by the midpoint of Q

Therefore, the proportionate change in the quantity demanded will be 0.33

The price will have a proportionate change when it falls down from $16 to $14. The % age change in price when price of the product falls down will be change in the price divided by the midpoint of P

Therefore, the proportionate change in the price will be -0.13

The price elasticity of demand therefore is 2.53.

The mid- point formula of price elasticity of demand is

The price elasticity of demand by mid -point method id 2.53 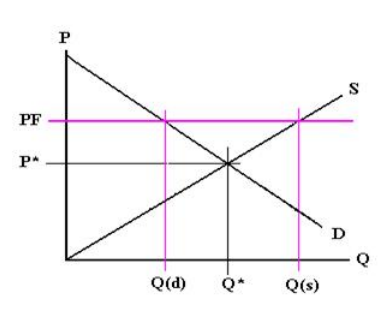 iii) Yes, it is in some case possible that the price floor has reduced the total revenue received by the farmer from selling cheese. As the government usually charges high price when the market price if cheese is itself low. However, the price may not be very remunerative and the farmers might demand more rise in the price.