b) Convert the followings:
i) OxBAD into a decimal number
ii) 58810 into a 3-base number
c) Given a (very) tiny computer that has a word size of 6 bits, what are the smallest negative numbers and the largest positive numbers that this computer can represent in each of the following representations?

a) Consider the following logic diagram of a combinational circuit where A, B, and C are inputs and Q is the output. Three 2-input AND gates and two 2-input OR gates are used in the circuit. It is possible to reduce some of the logic gates without changing the functionality of the circuit. Such component reduction results in higher operating speed (less delay time from input signal transition to output signal transition), less power consumption, less cost, and greater reliability. Construct a logic diagram of a circuit which does have the same function output with only two logic gates (instead of five). Please show the steps. 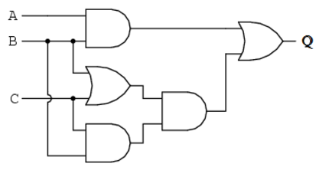 b) Using basic Boolean algebra identities for Boolean variables A, B and C, drove that ABC-F ABC' + AB'C + ABC = AB + AC + BC. Please show all steps and mention the identities used.

We will convert RHS into decimal number system.

We will expand LHS into decimal number system. Since the base is unknown, we will continue with the variable for the time being.

Solving this we get equation, we get x = 7

i). 0xBAD to binary. Wewill convert this hexadecimal number to binary by converting the individual characters. Binary is a number system with base 2, and hexadecimal has base 16. Thus there is a 1:4 mapping from hexadecimal to binary. We will use 8421 rule to calculate the equivalent binary.

We have a computer whose word size is 6 bits. Since we have to accommodate both positive and negative numbers, we need a way to identify this. This identification is done by using the most significant bit (MSB) for representing whether the number is positive, or negative, or by techniques as  used in two's complement.

The given diagram has the following equation:

Thus , the reduced equation can serve the same purpose with two logic gates one AND, and one OR. The logic diagram is as follows:

And this is equal to RHS, thus proved.

Talk to our expert to get the help with ITC544 Computer Organisation and Architecture:0xBAD to Binary Answers to complete your assessment on time and boost your grades now