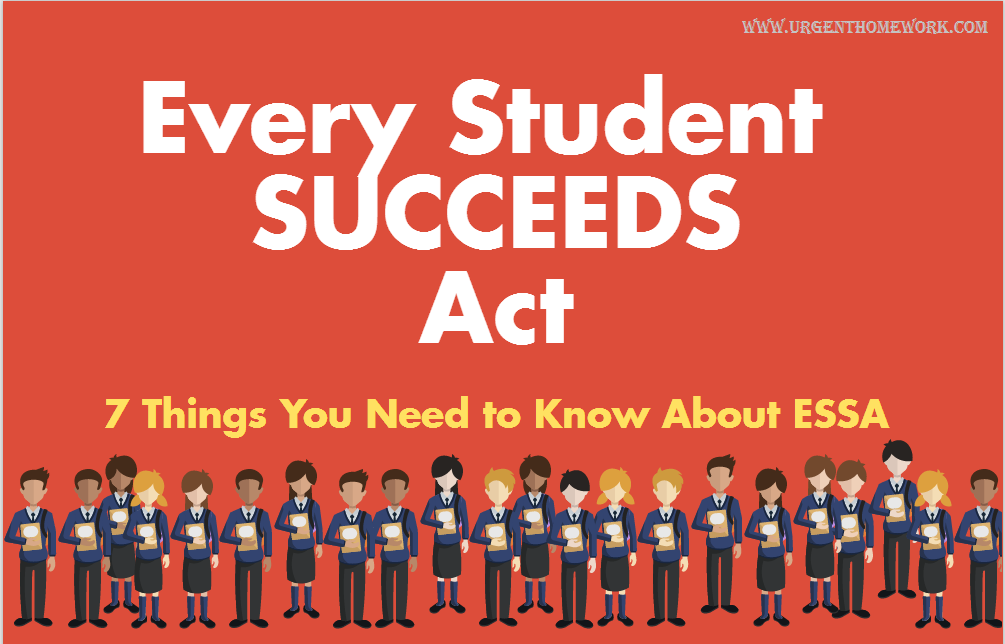 “Until we get equality in education, we won’t have an equal society.”- Sonia Sotomayor

Just as the above words say, education is the birthright of every person. Not to be judged on the basis of any parameters and be free to gain an education is every child’s right. It is so because education is what opens your mind to reach to the world, to make yourself a better person and to live a life of value. Without education in today’s times where there is cut-throat competition, it is hard to earn a good life then.

Keeping these things in mind, the Every Student Succeeds Act or the ESSA was put into action by the U.S President Mr. Barack Obama, which is a reauthorization of the President Johnson’s 1965 Elementary and Secondary Education Act. This was done so as to bring equity in education, keeping in mind the children who are not much privileged to have easy access to education. The legislators put forward such an idea so as to make a balance between federal commitments to protecting educationally disadvantaged students. Also, the objective of the act is to bring equality everywhere for education for each and every student.

The focus is made on the children right from the initial days of schooling since every day makes a difference to the child. Leaving no stone unturned, the authorities want to ensure that the children gain an education without fear, poverty and discrimination.

Here are a few facts which we should all know about the Every Student Succeeds Act.

A teacher is the one who shapes a child’s future. He guides them, motivates them in the right direction and shows him the path to create the best of his life. With so many responsibilities on the part of a teacher, it is important to lay down better ideas so as to improve teaching techniques and facilities in the schools and colleges. 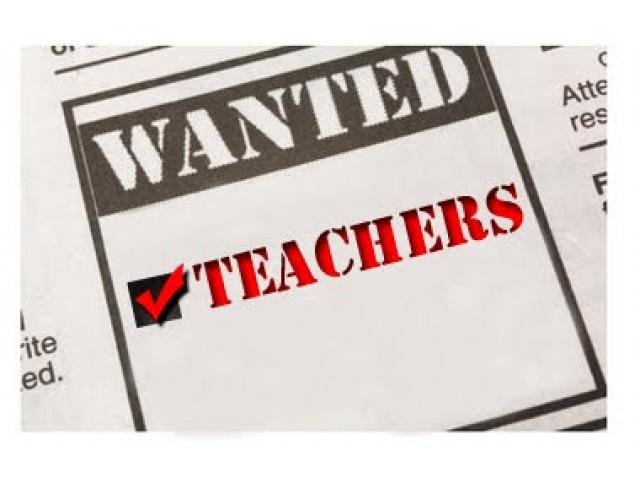 With the help of this law, teacher recruitment and retention issues will be solved to some extent. Thus, there will be number of teachers to assist the children better, giving them more time and focusing on each child individually. Also, teachers can enjoy teaching more using new creative ways to teach children so as to engage them better into studies and hold their interests into the subjects.

A test to test your knowledge is certainly required at some stages. But not in a way that it adds on to the stress, leaving the child trapped and under pressure, not knowing what to do. By making changes in the styles of assessments for the children, ESSA is trying to make the study environment feel more free and friendly, where the students learn about the world around them without the stress of loads of exams. 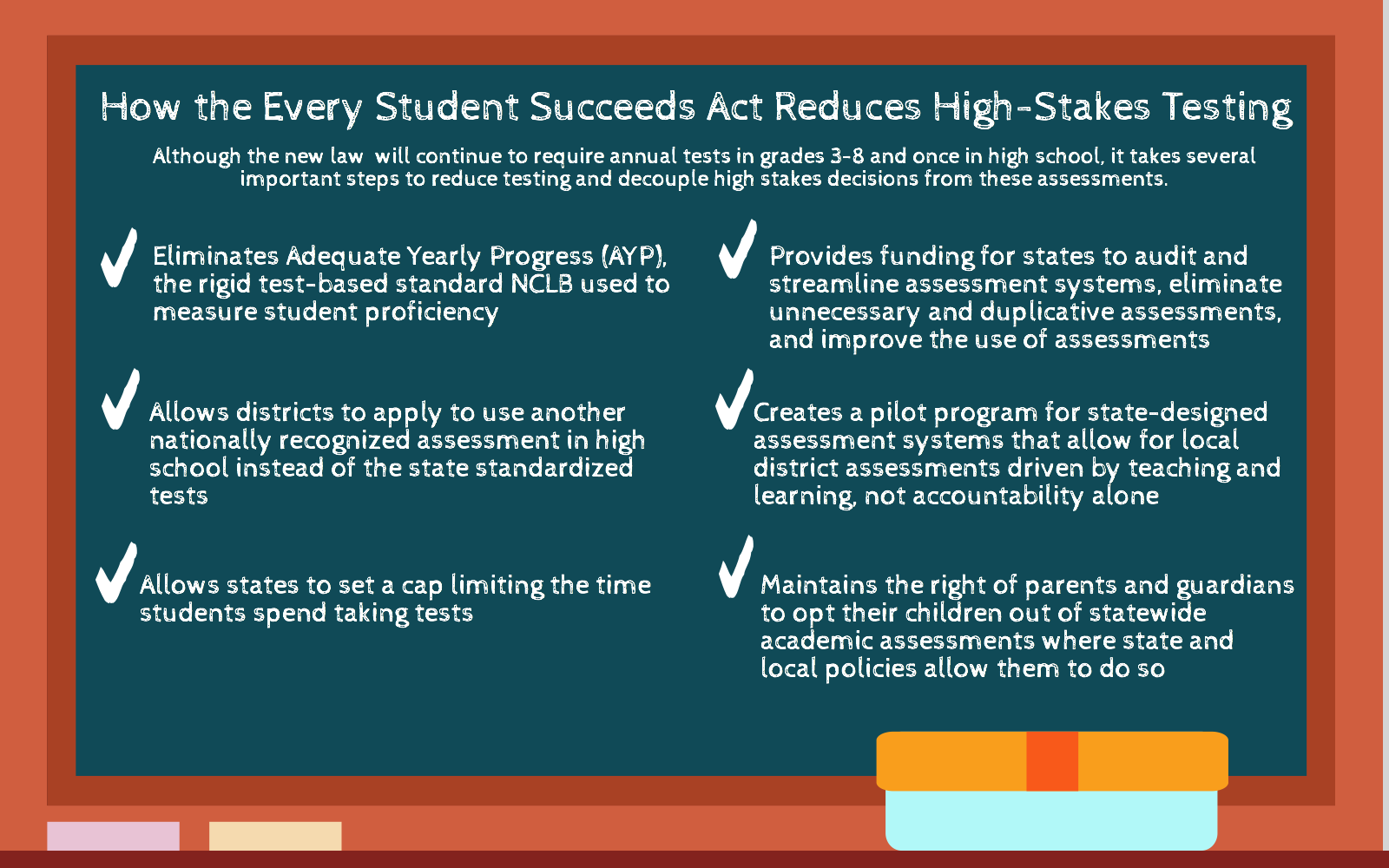 The assignments, projects, evaluation tests and so will still exist, but with certain changes to ensure flexibility, creativity, collaboration, makerEd and critical thinking in the system. This change was essential since assessment can lead to too much stress sometimes. Children do know the solutions to the question or have good ideas for their projects, but with the rise in their stress levels, sometimes the results do not come as good as expected. Hence, attempts have been made to bring flexibility into the system regarding assessments. 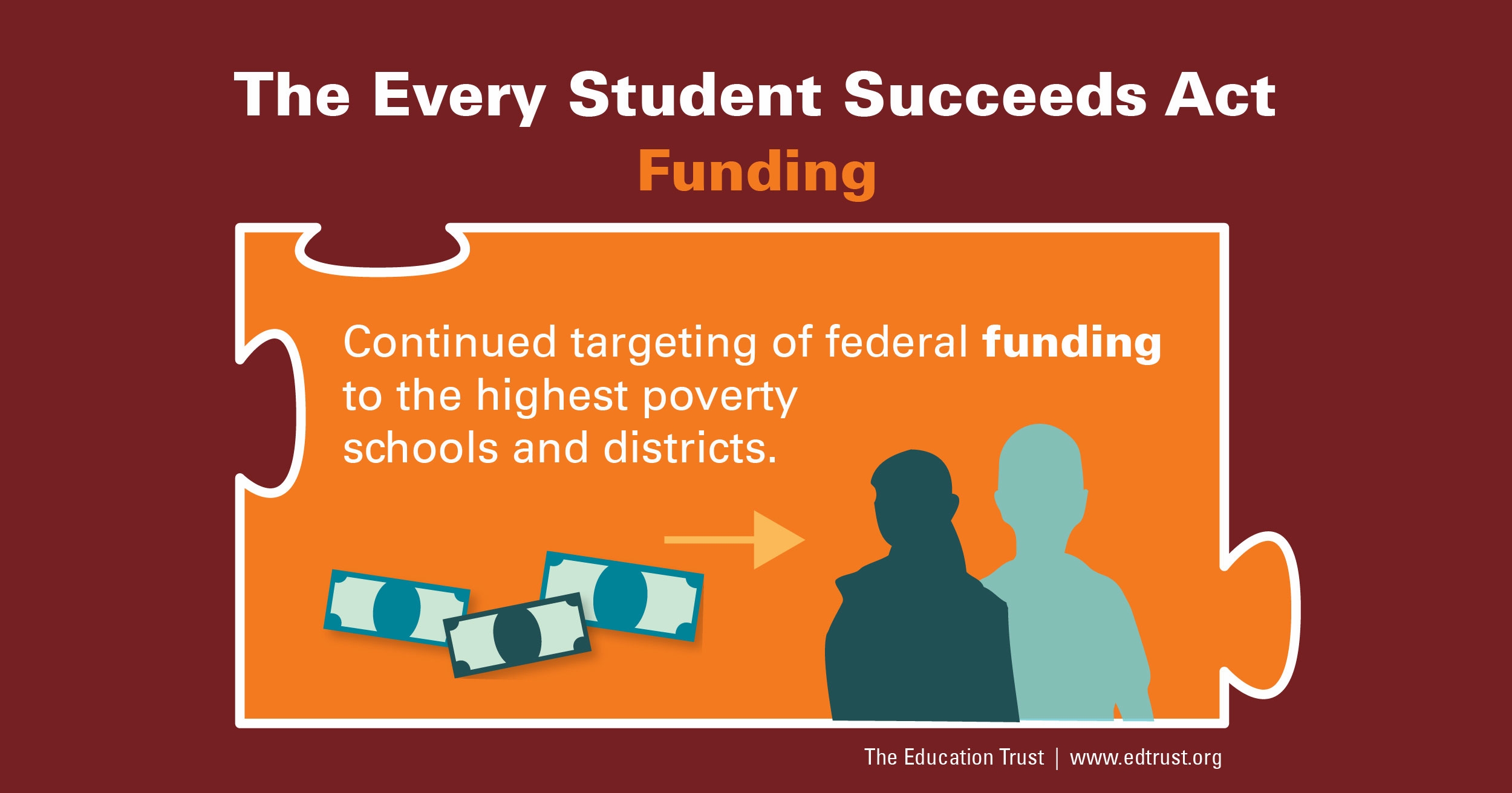 With this new idea on the roll, $1.7 billion dollars has been planned out for Student Support and Academic Enrichment (SSAE) Grant. The legislation has consolidated more than 80 federal education programs down to 50. The aim of this Grant is to ensure a sound overall development of the students, through a well planned educational program.

Under Every Student Succeeds Act, the federal government has decided that the states do not need to follow the Common Core or any other equivalent sets of that matter. After that, the final decision for each state is left up to their own plans and the executions. However, it does not mean that the Common Core is gone for good. 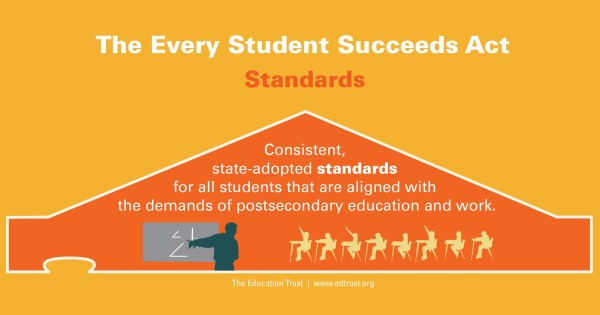 There are challenging standards that are yet to be adopted by the United States, so as to prepare the children for higher education for a good future. Although, after spending a hefty amount for the implementation of the common core, many states do choose to stick with the Common Core. The Every Student Succeeds Act of 2015 ends federal interference in state standards and ends the federal mandates on states to adopt the Common Core State Standards.

Just as the teaching methods keep changing from time to time, so should be the methods to test the knowledge. With the evolving study aids to help children learn much better, new ideas to test the students have also emerged.

According to ESSA, the districts must annually measure the performance of a student in mathematics and reading in 3-8 grades once during high school. Also, the science section of a student should also be examined during grades 3-5, 6-8 and 10-12. More subjects which are important for the curriculum can also be added. For high schools, it is allowed to the states to choose either ACT or SAT as their main assessment, keeping in mind that the focus should be on the growth of a student rather than the mastery of standards. 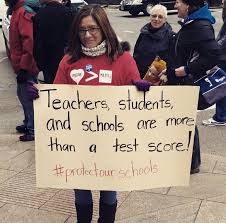 Do marks matter is the topic that still goes on, even for the ESSA. It does matter when it comes to ESSA, although it is allowed to consider the factors other than just marks, such as student and teacher relationship, school environment etc.

Under Every Student Succeeds Act, funding and incentives are provided for the states and districts that incorporate arts education, technical education and programs which promote the habit of living a healthy lifestyle. Such kind of ideas show that it is not just the academic scores which are being focused to improve, but the overall factors also play a vital role in child development. School libraries are also being brought back into the scenario, and their importance is being emphasized on. 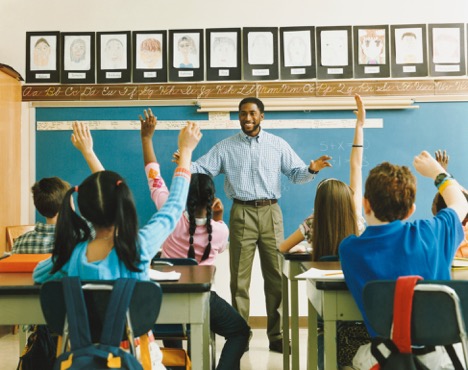 Other than this, there are various other programs to equip children for their bright future, such as physical education program, mental health programs and drug prevention programs. Such programs ensure that the children who go through such issues can also look up to someone to care for them and shape their future in the right direction.

The Every Student Succeeds Act aims at providing each and every student a fair, high quality, equitable education, so as to bring them closer to success and making them understand the value of education. Every student should know the features of the act so that he knows its benefits and makes the best out of it. With such a well-planned program, it is expected that the Act will be a success and reach out to every child, giving them their equal right to education.

p.s. if you are looking for ESSA curriculum based online tutoring for your kids, then UrgentHomework’s online tutors are just a click away.