Whether it is the first day of the week, the month, or the year, it brings with itself a new world of possibilities. Somehow these days have a special place in our heart. They play a special part in our lives. We wait for these days to start something from scratch or resume something that we have left off. It has a nice ring to it too. For instance, I’ll start working out on Monday sounds way better then I’ll start working out on Wednesday. Similarly, I’ll start studying from the first of February sounds better then I’ll start studying on the fifth of February. This feeling epitomizes at the beginning of every year, which leads to the making of New Year resolutions.

Isn’t it amazing that we human beings choose one single day out of the 365 days to change all our habits in a single go? Now think for a second, what’s so special about New Year, that we become ready to take a resolution and change our habits on that single day. Well, the answer is pretty simple – New Year symbolizes change, and subconsciously we have realized that change is the essence of life. The optimist within us tells us that this New Year (i.e. change) will be great for us and to celebrate this change we make resolutions.

Now some of you may make a counter-argument that there are many people that do not make any New Year resolutions. In fact, only a quarter of a British population reported having made a New Year resolution last year. An overwhelming 70% population did not even bother. So have they subconsciously not realized the essence of change yet? The answer to this question is, that these are the people who have failed several times in fulfilling their New Year resolution, and now they have stopped making any resolutions because they know, they are gonna fail.

A study by statisticbrain.com pointed out that, even out of 45% people who usually keep resolutions, only 8% of people succeed in achieving their resolution. Let us analyze why so many people fail to achieve their New Year Resolutions!

Here is Why Most People’s New Year Resolutions Fail

The reason lies in this graph. The most common reason people’s New Year resolution fail is that people try to change a very big habit at once or they try to change too many at once. The motivation needed for changing a habit is inversely proportional to the percentage of Habit change achieved. Put simply, to change your habits even by an infinitesimally small percentage a drastic amount of motivation and commitment is required. This is evident even from BUPA research which clearly shows 50% of those who failed at keeping their resolutions cited “lack of motivation” as the prime reason.

Now, if you are a chain smoker and your New Year resolution is to quit smoking at once, then you are bound to fail. There is no second guessing on that. If you are trying to change such a big habit, you should have a step by step plan for doing it and you should write that out. It should be something like this –

First Week – Reducing the no. of cigarettes by two

Second Week – Reducing the no. of cigarettes by two

And so on till you reach zero and you should also keep nicotine patches and chewing gums with you as a precautionary measure, in case you relapse. Reward yourself with a treat after each week. Please just don’t reward yourself by lighting a cigarette. 😉 You should have a full contingency plan like this before you even start.

Changing a habit is a gradual process, even if the habit is incredibly tiny like taking up the habit of brushing before going to bed at night. It takes time. In addition to this, there is a compounding effect of trying to change too many things too fast

People also try to change too many habits at the same time. This is also a major factor due to which people fail to achieve their resolution. You should always try to change one habit at a time. Focusing your motivation, commitment and energy on a single habit leads to better results.

Now let us see what effect making New Year resolutions has on people lives. According to a survey by Nielsen.com in 2015, the top three New Year resolutions were – stay fit and healthy, lose weight and enjoy life to the fullest. Incorporating two out of these three changes requires a lot of time, effort and strong will power. We already have a pretty busy schedule, and finding time to incorporate new changes can be a daunting task. We also think that our strong will power will help us stick to our new routine, but one thing that most people don’t know is, that will power is a diminishing resource. It keeps out draining throughout the day whenever we exert it.

The New Year resolutions have a pretty positive effect at the beginning; we are able to meet our goals as we are highly motivated at the beginning. But as time goes on, our motivation decreases and most of us are not able to meet the goals that we had set. As is evident in the above graph, only 70% of people are able to stick to their New Year Resolutions by the end of two weeks. This creates a feeling of failing and leads to self-loathing and unworthiness. It has a negative impact on many people lives. It also has a positive impact on some people who are able to achieve their goals but the no. of such people is lesser than 1 in 10. So, one should be carefully realistic while choosing their New Year resolutions. Making New Years Resolutions that do not complement your lifestyle as well as demand much more time and effort than you can commit creates a false sense of low self-esteem and can make you plunge back deeper into your Bad-Self.

How to stick to your New Year Resolution 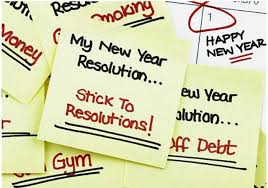 And the most important thing is not to be too hard on yourself when you occasionally slip in meeting your goal or you have completely abandoned your goal. There is always gonna be the next year to achieve them. 😉

Have you made your New Year Resolutions for 2016? We would love to hear your goals and your action plan to achieve them. Share with us in comments.

Wishing you all a Prosperous and Successful New Year.

2 thoughts on “Conquer the psychology behind New Year Resolution Fails”